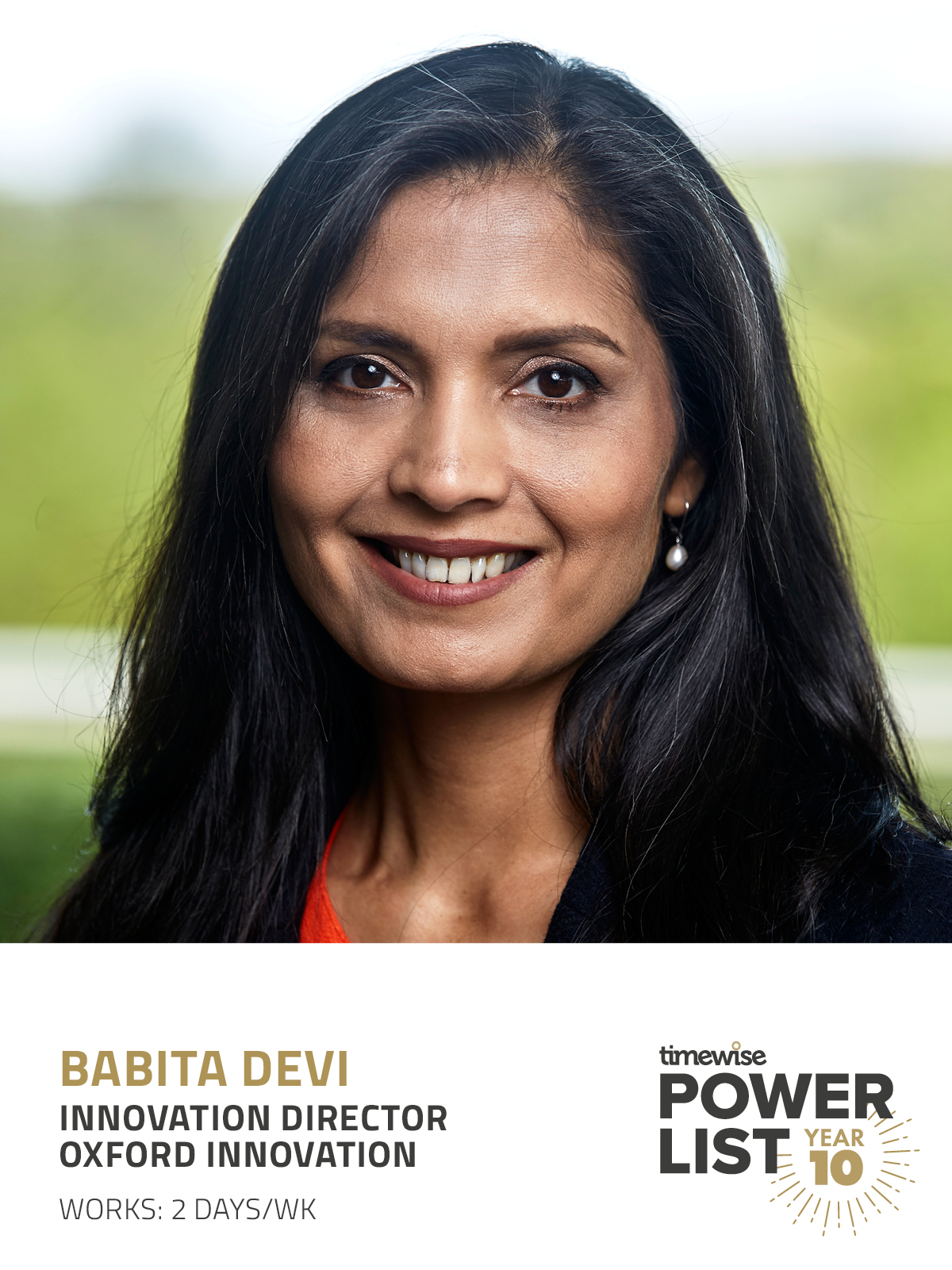 The 10th annual Timewise Power List tells the stories of some of the most successful people in the UK who have either been hired part-time from day one in their jobs, or promoted while working part-time. Babita Devi of Cambridge features on it. She is the Innovation Director at The EpiCentre – part of Oxford Innovation, working 2 days per week.

Babita’s role is to drive economic growth in the East of England. She took on the role of the Innovation Director during the pandemic and has spent the last 18 months accelerating high potential start-ups and SMEs that are developing cutting-edge innovations.

After managing the challenges of raising children, whilst working full-time, Babita decided to change her work commitments and created a portfolio career. This enables her to coach and mentor companies on various programmes, assume Board level roles and build her own company, without compromising time spent with her family.

The Timewise Power List aims to change perceptions around part-time work and what kind of roles can work successfully on 4 days per week or fewer. For 10 years, the Timewise Power List has found and profiled more than 400 people in top jobs. Proving that in great companies, part-time can mean ambitious, can mean senior – can even mean being the boss.

Part-time workers account for 8 million people – that’s a quarter of the UK’s entire working population. According to new research from Timewise, 750,000 of them now work part-time in roles with a senior and responsible remit. The winners of the List represent their skills, experience, talent and dedication to their jobs. With 9 in 10 people wanting flexibility in their next job, they also represent the future of work in the UK.

You can see the new Timewise Power List in full at timewise.co.uk. It is  backed by EY, Diageo, Lloyds Banking Group and the Recruitment & Employment Confederation (REC).

From next year onwards, Timewise will expand the scope of the List, which aims to capture real-life voices and experiences. It will run the UK’s first ever omnibus of part-time workers, representing the voices of people in all kinds of part-time jobs, at all kinds of levels.

Timewise CEO Melissa Jamieson says: “Babita Devi is a true role model for others who want and need to work flexibly. Conversation around part-time work in the UK usually pivot around what’s not possible. The Power List showcases what is. Flexible workers may be facing their toughest year yet, in terms of stigma as well as the dominance of hybrid working in the flexible working conversation, reducing critical discussions around other forms of flexible and part-time work.  We must keep making sure their voices are heard, their experiences are understood, and that their incredible talents and achievements are seen.”